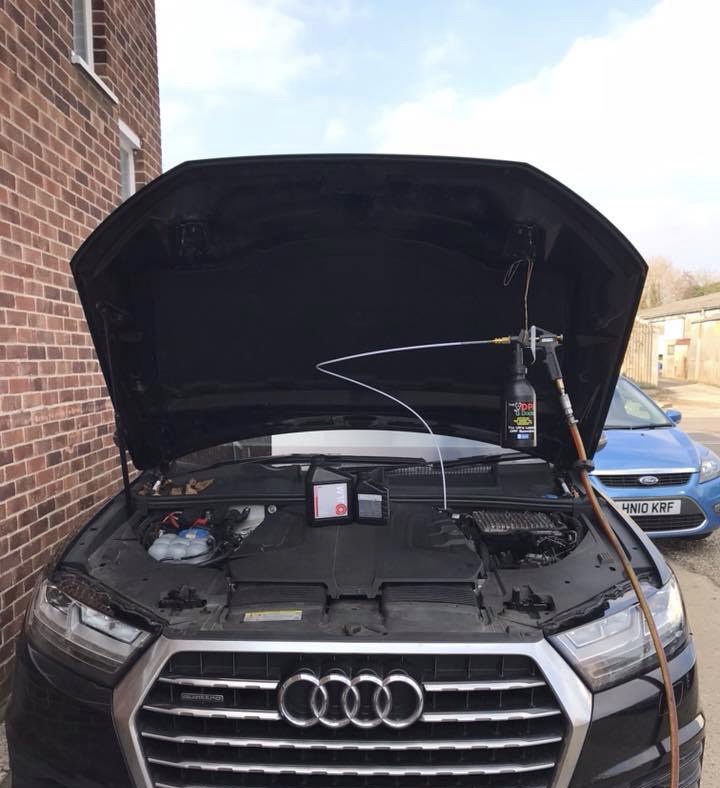 Diesel Particulate filters have been a growing problem in our industry for some time, this is not new technology and for anyone who owns a diesel vehicle I'm sure the letters DPF have given you some sleepless nights.

What we used to do

We have led the way in DPF system cleaning and repairs for many years in Newbury.

Once the root cause of the blocked DPF has been found and rectified whether that be down too driving style or an actual system fault causing the DPF not to regenerate and there for block up the main issue has always been how to then clean the filter successfully at the best value for money possible for the customer, we had tried all the DPF cleaning chemicals on the market, there are loads of them out there, if it's available we have tried it, some worked ok sometimes and others didn't work at all either way this we couldn't confidently guarantee our customer their money would be well spent. So up until now we have generally removed the DPF so we could sent in to be chemically cleaned off the vehicle which works really well, however there are some huge downfalls to doing this, firstly is the cost of the labour to the customer, secondly is due to the nature of an exhaust getting hot and cold all the time the parts and sensors on the system would seize solid and normally strip threads when being removed which would normally mean expensive replacement parts and sometime worst case a new DPF would have to be fitted. So this is why companies such as ourselves always try to find an in situ cleaner that works and this is where we came across the DPF Doctor network.

The DPF Doctor network was started by a guy called Darren Darling in Newcastle, much like ourselves he's obsessed with quality and doing the right thing by the customer, Darren found a product in the Netherlands and found it worked well, after years of testing the DPF Doctor network was born, this isn't like any other network where any Tom, Dick or Harry can just join, a garage has to meet Darren's standards in the field and it's this reason alone that makes this network so amazing, so far there are 50 dealers but all our of the highest standard, there are some seriously skilled diagnostic technicians in this network some of the best in the country, there are 4 out of the 5 Top Technician 2017 finalists in this network including the Winner Karl and Shaun our technician who was a very close runner up.

The network is a very close nit network that works together, we wall regularly attend further training courses written by Darren to further the skills we need to carry out the first time fix DPF solution.

The most important part of the process is finding out exactly what has caused the DPF to block in the first place, because whats the point in cleaning the filter if it's just going to become blocked again with in a few weeks, there are multiple things that can cause the DPF to block, it can be as simple as driving style, if the car is only used to go to the shops and back the filter will not get a chance to regenerate and become blocked, or it could be engine mechanical or electrical issue causing the filter to block, we run through our ruthless DPF Doctor diagnostic process and get to the route cause, once this is found we can accurately quote to repair the faults and clean the DPF.

The cleaning process is a 3 stage in situ chemical clean and flush.

we inject a cleaning fluid in to the DPF filter itself and then using the vehicle exhaust gases we force the cleaner along with the diesel particulate its cleaned from the filtre out the tailpipe of the exhaust, we then carry out a     we constantly get vehicles in that have been elsewhere and had a failed clean.

We carry out the same process with two stages of flushing agent, this removes any left over chemical and particulate from the filter

Question: Why can't we just fit a replacement DPF?

Answer: Replacing the DPF is certainly an option but to do this correctly is very costly option. A genuine filter can cost up to £1500 just for the part, you can buy aftermarket DPF's but I certainly wouldn't recommend fitting one, a genuine DPF has the lifespan of somewhere between 100-150,000 miles where as the aftermarket version will only last up 40,000 miles, they are poorly made and can cause pressure readings issues from new and the filter itself is very poor quality, this is why we always clean the genuine filter

Question: What's the difference between Particulate matter and Ash?

Answer: Particulate matter is the byproduct of the diesel engine, its extremely harmful to humans as is carcinogenic, the DPF filter catches this and then is burnt of via regeneration.

Ash is a byproduct of the DPF regeneration process, a very small amount of ash is created during the regeneration stage and this gathers in the filter, if a vehicle has a high ash content this is generally caused by the engine burning oil.

Question: I've been told a DPF cannot be Cleaned in situ because of the ash build up?

Answer: Ash can not be removed by an in situ clean but this isn't to be of concern as the levels of ash caused by the regeneration process is so minimal it doesn't matter

Question: I've been told to use these poor in tank additives to help regeneration process, are these effective?

Answer: No stay away from these products as they promote heat to help a regeneration take place, the average temperature of a DPF regeneration is around 500 degree C, however if you add one of the many additives available this can go upwards of 900 degrees C and cause a total failure of the DPF, stay well clear.

We this Audi Q7 come with multiple engine management lights on the dash, it turns out a rat had got hungry and chewed through several wires in the engine bay, the owner continued to drive the vehicle for a couple of months without getting the faults fixed, until one day he noticed a serious loss of power, he bought the vehicle in to us and following our award winning diagnostic routine we confirmed all the faults with car, some of the faults stored where relating to DPF issues, so after we repaired the original wiring issues and restored normal engine management operation to the engine we set about looking at DPF faults, the vehicle had stopped the regeneration process from taking place due to so many electrical faults to protect itself and the DPF had become badly blocked, so bad we had 1.8bar of back pressure at the pressure sensor at idle, to give you some idea a good sensor reading at idle would be 10mbar.

So we carried out our 3 stage DPF clean and then road tested the vehicle, we then carried out a post clean checks and now had an idle pressure of 15mbar, this was an amazing success as most of the other systems we had tried in the past would have touched that kind of blockage.

The car left us with a new lease of life and we saved the customer Thousands on the price of replacing the DPF filter.